Feast of the Immaculate Heart of Mary

Patron of the Divine Will
and
The Servant of God Luisa Piccarreta’s namesake. 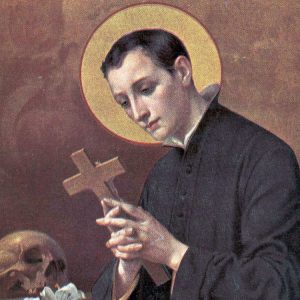 The Servant of God Luisa Piccarreta, the Little Daughter of the Divine Will,  baptismal name was after St. Aloysius (St. Luis).  “Luisa” means “mighty in warfare.”

Luisa was born on April 23rd, the Feast of St. George the Martyr, in the province of Apulia, which is located on the heel of the Italian “boot”—which points to Jerusalem. In Genesis 3:15 God promised to crush the serpent’s head. In 1868, within 3 years after Luisa’s birth, the Church of the “Pater Noster” in Jerusalem was rebuilt for the third time, recalling the only prayer taught by Jesus: “Thy Kingdom come, Thy Will be done on earth as It is in Heaven.”

Luisa was born and died in the Diocese of Trani-Nazareth, in the town of Corato, whose name in its original Latin, cor datum, means “a heart given.”  This recalls the words of the Prophet Ezekiel:

“A new heart I will give you, and a new spirit I will put within you; and I will take out of your flesh the heart of stone and give you a heart of flesh.  And I will put my spirit within you, and cause you to walk in my statutes and be careful to observe my ordinances.  You shall dwell in the land which I gave your fathers; and you shall be my people, and I will be your God.  (Ezekiel 36:27-28)

The Feast day of St. Aloysius, June 21st, was the same day of the release of the Baltimore Catechism.

St. Aloysius Gonzaga—Feast Day June 21st.  He is known for his purity and the performance of great austerities and religious practices.  St. Aloysius joined the Jesuits in Rome in 1585.  He has been declared Protector of young students and Patron of Catholic Youth.

St. Aloysius Gonzaga is known for his purity and the performance of great austerities and religious practices. Aloysius is the Latin form of Gonzaga’s given name, Luigi. In English, the equivalent form would be Louis. The Gonzaga name is well known in Italy. Aloysius Gonzaga was born at Castiglione near Mantua, Italy, in 1568 to a celebrated family of wealth and prestige. As the first born son of his father, Ferrante, and his mother, Marta, he was in line to inherit his father’s title of Marquis. He grew up amid the violence and brutality of the Renaissance Italy and witnessed the murder of two of his brothers. In 1576, Aloysius’ parents sent him to attend the court of the Grand Duke of Tuscany, Francesco de’Medici, in Florence. Later, accompanied by his parents, he traveled to Spain to join the court of Philip II in Madrid.

In Spain, Aloysius decided he wanted to join the newly founded religious order, The Society of Jesus. His father resisted his decision and there followed a struggle of wills that continued after his return to Castiglione in 1584. But Aloysius eventually prevailed. Renouncing his right to the title of Marquis and to the vast wealth he was destined to inherit, he entered the Society of Jesus in Rome on November 25, 1585. During his early studies in Rome, he would regularly go out into the streets of the city to care for victims of the plague. He himself contracted the disease as a result of his efforts for the suffering and died on June 21, 1591, at the age of twenty-three, six years short of his ordination as a Jesuit priest.

Even before his time as a Jesuit, Aloysius was known for his love of prayer and fasting. He received his First Communion from St. Charles Borromeo. As a Jesuit at the Roman College, he continued to devote his time to prayer and practices of austerity.  His spiritual director was Robert Bellarmine, who later was canonized and declared a doctor of the church.  When Robert was dying, he asked to be buried next to the grave of Aloysius.  Today, they rest next to each other in the church of St. Ignatius Loyola in Rome.  Pope Benedict XIII canonized Aloysius in 1726, and three years later declared him to be the patron of youth in the Catholic Church, an honor later confirmed by Pope Pius XI in 1926.

Permanent link to this article: https://www.bookofheaven.net/2020/06/21/feast-day-of-st-aloysius-gonzaga-june-21/