Happy Easter – He is Risen

Divine Mercy in My Soul

What the Angel of Peace gave to the Children at Fatima 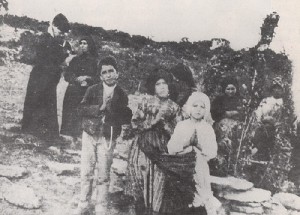 Circumstances and Dialogue of the 1916 Apparitions

In the spring of 1916, three young Portuguese shepherds, Lucy dos Santos and her cousins Francisco and Jacinta Marto, led their sheep to graze on a hill called the Cabeço. Rain began to fall, so the children found a place on the hillside to serve as a shelter. Even after the rain had passed and the sun had returned, the little shepherds spent the day at this spot, eating lunch, saying the Rosary and playing games. Lucy was then only nine years old, Francisco was eight, and Jacinta was six.

As they were playing, a strong wind suddenly blew, shaking the trees, and the children saw a figure approaching above the olive trees. Lucy described the figure as having “the appearance of a young man of fourteen or fifteen, whiter than snow, which the sun rendered transparent as if it were of crystal, and of great beauty. We were surprised and half absorbed. We did not say a word.

“While coming closer to us, the Angel said: ‘Do not fear! I am the Angel of Peace. Pray with me.’ And kneeling on the earth, he bent his forehead to the ground. Prompted by a supernatural movement, we imitated him and repeated the words which we heard him pronounce: ‘My God, I believe in Thee, I adore Thee, I hope in Thee and I love Thee. I ask pardon for all those who do not believe in Thee, do not adore Thee, do not hope in Thee and do not love Thee.’

“Having repeated that prayer three times, he got up again and said to us: ‘Pray in this way. The Hearts of Jesus and Mary are attentive to the voice of your supplications.’ And he disappeared.”

Lucy recalled, “The supernatural atmosphere which enveloped us was so intense that, during a long moment, we barely realized the fact of our own existence. We remained in the position in which the Angel had left us, always repeating the same prayer. The presence of God made itself felt in such an intense and intimate manner, that we did not dare even to speak any longer among ourselves. The next day, we still felt our spirit enveloped in this atmosphere which only disappeared very slowly.”

The Angel of Peace had come to speak to the children, to infuse them with this extraordinary grace through which they were penetrated with the Divine Presence, and to demonstrate to them the attitude, posture and fervor with which to pray to God. Interestingly, during the apparition Francisco could not hear the words of the Angel, and had to be told what was said afterward; this would be the case for all of the other apparitions as well. After some time the three little shepherds recovered their physical strength and playfulness.

The second apparition of the Angel took place during the summer of 1916. While the children were playing around their favorite well, the Angel suddenly appeared. “What are you doing?” he asked. “Pray, pray a great deal! The Holy Hearts of Jesus and Mary have designs of mercy on you. Offer unceasingly prayers and sacrifice yourselves to the Most High.”

Lucy asked the Angel how they were to make sacrifices.

The Angel replied, “Make of everything you can a sacrifice and offer it to God as an act of reparation for the sins by which He is offended, and in supplication for the conversion of sinners. In this way, you will draw peace upon your country. I am its Guardian Angel, the Angel of Portugal. Above all, accept and bear with submission the sufferings which the Lord will send you.”

Lucy comments, “Those words of the Angel engraved themselves in our spirit, as a light which made us understand Who God is, how much He loves us and wants to be loved by us, the value of sacrifice and how pleasing it is to Him, and that out of respect for it, God converts sinners.” The dominant theme in this second apparition of the Angel was the importance of making offerings to God through every possible action and sacrifice, even the smallest, and of making the offerings with special intentions, especially for the conversion of sinners.

The third apparition of the Angel took place in the autumn of 1916, the children took their sheep to the same place where the first apparition took place. There in the blessed place of the Cabeço, they were reciting the prayer the Angel had taught them when above them an unknown light appeared. Lucy relates, “We got up again to see what was happening, and we saw the Angel again, who had in his left hand a Chalice over which was suspended a Host, from which some drops of Blood fell into the Chalice.”

Leaving the Chalice and the Host suspended in the air, he prostrated himself down to the earth near the children and repeated three times this prayer:

Most Holy Trinity, Father, Son, and Holy Ghost, I adore You profoundly, and I offer You the Most Precious Body, Blood, Soul and Divinity of Jesus Christ, present in the tabernacles of the world, in reparation for the outrages, sacrileges and indifferences by which He, Himself is offended. And I draw upon the infinite merits of the Most Sacred Heart of Jesus and of the Immaculate Heart of Mary, that You might convert poor sinners.

Then, getting up, the Angel took the Chalice and Host. He gave Lucy the Sacred Host on the tongue. Then while giving the Precious Blood from the Chalice to Francisco and Jacinta, he said:

“Eat and drink the Body and Blood of Jesus Christ, horribly outraged by ungrateful men. Make reparation for their crimes and console your God.” Then, prostrating himself on the ground he repeated with the children three times the same prayer: Most Holy Trinity, Father, Son, and Holy Ghost, I adore You profoundly, and I offer You the Most Precious Body, Blood, Soul and Divinity of Jesus Christ, present in the tabernacles of the world, in reparation for the outrages, sacrileges and indifferences by which He, Himself is offended. And I draw upon the infinite merits of the Most Sacred Heart of Jesus and of the Immaculate Heart of Mary, that You might convert poor sinners.

This final apparition of the Angel was clearly the summit of the three, as the children were graced to see the Precious Blood of Our Lord fall from the Sacred Host into the Chalice, and then receive Holy Communion from the hands of the Angel.

Again, the need for converting poor sinners was a theme in this final apparition of the Angel. The prayer repeated by the Angel demonstrates that through our prayers, united with the infinite merits of the Sacred Heart of Jesus and the Immaculate Heart of Mary, sinners can be converted. Our prayers and sacrifices alone amount to very little; but when they are united to the merits of the Sacred and Immaculate Hearts, they become infinitely valuable. Also emphasized was the need for reparation for the sins committed against God, by which He is constantly hurt and seeking consolation. In addition, the way the children received Holy Communion is particularly instructive for our time: they received Communion in the kneeling position, and the Sacred Host was given on the tongue.

The appearance of the Angel of Peace to three little Portuguese shepherds was a preparation for the signal grace that was about to be bestowed upon them: the appearance of the Queen of Heaven, the Blessed Virgin Mary. The apparitions of the Angel prepared them for seeing the Mother of God, through the transforming Divine graces the Angel showered on them, and his instructions about prayer, sacrifice and offerings. Through his apparitions to Lucy, Francisco and Jacinta, the Angel of Peace came to ready them for the decisive roles they were each to play in the most important event of the Twentieth Century, the appearance of Our Lady at Fatima.

Yet the Angel of Peace’s instructions were not meant for the children alone. They apply to each of us especially this year 2016, and just as they prepared the children for the apparitions of the Blessed Virgin, they can also help serve as a preparation for our reception of Our Lady’s Fatima Message in 2017.

Permanent link to this article: https://www.bookofheaven.net/2016/03/30/what-the-angel-of-peace-gave-to-the-children-at-fatima/