Preparing for the Outpouring of the Holy Spirit 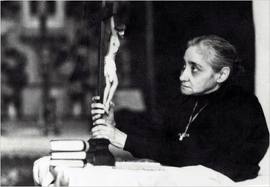 So, going back to Faith, Jesus would say: “In order to obtain, one must believe. Just as for the head without the sight of the eyes, everything is darkness, everything is confusion, so much so, that if one wanted to walk, he would stumble now at one point, now at another, and would end up falling completely, the same for the soul without Faith – she does nothing but go from precipice to precipice. But Faith serves as the sight of the soul, and as the light which guides her to eternal life. Now, what is this light of Faith nourished by? By Hope. Now, what is the substance of this light of Faith, and of this nourishment of Hope? It is Charity. All of these three virtues are grafted to one another, in such a way that one cannot be without the other.

In fact, what good comes to man from believing in the immense riches of Faith, if he does not hope for them, for himself? He will look at them, yes, but with indifferent eye, because he knows that they do not belong to him. But Hope provides the light of Faith with wings, and by hoping in the merits of Jesus Christ, he looks at them as his own, and he comes to love them.”

“Hope“, Jesus said, “provides the soul with a garment of fortitude, almost of iron, in such a way that, with all of their arrows, the enemies cannot wound her; not only this, but they cannot cause even the slightest disturbance. Everything is tranquillity in her, everything is peace. Oh! it is beautiful to see this soul invested with beautiful Hope, all cleaving to her beloved, all distrustful of herself, and all trustful in God. She challenges the fiercest enemies, she is queen of her passions; she regulates all of her interior, her inclinations, desires, heartbeats, thoughts, with such mastery that Jesus Himself remains enamored, because He sees that this soul operates with such courage and strength. But she draws it from Him, and places all her hope in Him, so much so, that in seeing this firm hope, Jesus cannot deny anything to this soul.

Now, while Jesus would speak about Hope, He would withdraw for a little, leaving a light in my intellect. Who can tell what I comprehended about Hope? If all the other virtues serve to embellish the soul, but can make us stagger and render us inconstant – Hope, instead, renders the soul firm and stable, like those high mountains which cannot be moved a tiny bit. It seems to me that it happens to the soul invested with Hope as to certain very high mountains: all of the intemperances of the air cannot do any harm to these mountains; neither snow, nor winds, nor heat can penetrate into them; whatever thing might be placed at their top, one can be sure of finding there where it was put, even if a hundred years should pass. Just so is the soul clothed with Hope: nothing can do harm to her, neither tribulation, nor poverty; nor do all the various accidents of life dismay her for one instant. She says to herself: “I can do everything, I can bear everything, suffer everything – hoping in Jesus, who forms the object of all my hopes.”

Hope renders the soul almost omnipotent, invincible, and it administers to her the final perseverance, so much so, that only then does she cease to hope and to persevere, when she has taken possession of the Kingdom of Heaven. Then, she lays down Hope and plunges all of herself into the immense ocean of Divine Love.

While my soul would dissolve in the immense sea of Hope, my beloved Jesus would come back and speak to me about Charity, telling me: “Faith and Hope give way to Charity, and Charity connects all the rest of the other two together, in such a way as to make them one, while they are three. And here is how, oh my spouse, the Trinity of the Divine Persons is concealed in the three theological virtues.”

Then He continued: “If Faith makes one believe, and Hope makes one hope, Charity makes one love. If Faith is light and serves as the sight of the soul, and Hope, which is the nourishment of Faith, provides the souls with courage, peace, perseverance and all the rest – Charity, which is the substance of this light and of this nourishment, is like that most sweet and fragrant ointment which, penetrating everywhere, relieves and soothes the pains of life. Charity makes suffering sweet, and makes one reach the point even of desiring it. The soul who possesses Charity diffuses fragrance everywhere; her works, all done out of love, give off a most pleasing odor. And what is this odor? It is the odor of God Himself. The other virtues render the soul solitary and almost unrefined with creatures; Charity, on the other hand, being substance that unites, unites the hearts. But where? In God. Being a most fragrant ointment, Charity spreads everywhere and with everyone. Charity makes one suffer the most ruthless torments with joy, and one reaches the point of not being able to be without suffering. And when she see herself deprived of it, she says to her spouse Jesus: “Sustain me with the fruits, which is suffering, because I am languishing with love; and where else can I show You my love other than in suffering for You?” Charity burns, consumes all other things, even the virtues themselves, and turns them all into itself. In sum, it is like a queen who wants to reign everywhere, and does not want to surrender to anyone.”

Permanent link to this article: https://www.bookofheaven.net/2016/05/17/faith-hope-and-charity/