Plenary Indulgence of the Forgiveness of Assisi August 2 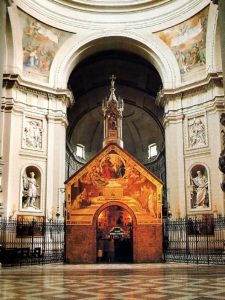 St. Francis repaired three chapels. The third was popularly called the Portiuncula
or the Little Portion, dedicated to St. Mary of the Angels. It is now enclosed in a
sanctuary at Assisi. The friars came to live at the Little Portion in early 1211. It
became the “motherhouse” of the Franciscans. This is where St. Clare came to
the friars to make her vows during the night following Palm Sunday in 1212 and
where Sister Death came to Francis on 3 October 1226.

The Portiuncula (small portion) refers to the land in Assisi, Italy, that belonged to the Benedictines.

On this land  was an old church dedicated to the Virgin Mother of God but abandoned.

The great St. Francis had great devotion to the queen of the world and when he saw that the church was deserted, he began to live there constantly and repair it.  He heard that the angels often visited it, so that it was called St. Mary of the Angels.

The Benedictines wanted to give Francis the church but in order to remain faithful to Lady Poverty, Francis rented it from them with the annual compensation of a basket of fish from the Tescio river.

Here is where Francis began his service to Christ and His Church. Here Francis founded his Order, received Clare as his spiritual daughter, and where he died commending this spot above all others to the friars.

St. Francis had great love and compassion for everyone.

On a night of July, 1216, Francis was praying in the little church of the Portiuncula devoured by love for God and a thirst to save souls. He prayed for the forgiveness of sins of mankind.

Suddenly a brilliant light shone all around. In great splendor Jesus and Mary appeared in the midst of a dazzling cloud surrounded by a multitude of radiant angels.

Out of fear and reverence, St. Francis adored Our Lord prostrate upon the ground.

Then Jesus said to him: “Francis you are very zealous for the good of souls. Ask me what you want for their salvation.” St. Francis was rapt in ecstasy before Jesus.

When he regained his courage he said:

“Lord, I a miserable sinner beg You to concede an indulgence to all those who enter this church, who are truly contrite and have confessed their sins. And I beg Blessed Mary, your Mother, intercessor of man, that she intercede on behalf of this grace.”

Our Lady at once began to beseech her son on behalf of Francis. Jesus answered:

“It is a very great thing that which you ask Me; but you are worthy of even greater things, Friar Francis, and greater things you will have. So I accept your request, but I want you to go to my Vicar, to whom I have given the power to bind and loose in Heaven and on earth, to ask him on my behalf for this indulgence.”

With one of his companions, Francis hastened to Pope Honorius III and prostrate implored him to proclaim that every one visiting the church and confessing their sins with a contrite heart would be as pure from all sin and punishments as he was immediately after baptism. The Pope granted this petition. This indulgence has been extended to all parish churches throughout the world.

The date was set from vespers of the first of August until sundown on the second of August, the Feast of Our Lady of the Angels. It is said that St. Francis was given this day by Our Lord because the Feast of the Chains of St. Peter celebrated on August first is the day Peter was released from prison and his chains removed. This is an extraordinary demonstration of God’s mercy in removing the chains of sin from those who devoutly and faithfully seek to gain the indulgence by completing its requirements.

The indulgence may be gained as often as one wishes (i.e. visits to the church). It is applicable to oneself or the souls in purgatory.

Requirements for Gaining the Portiuncula Indulgence of the Forgiveness of Assisi

◗ Devoutly visit the parochial (i.e. parish) church on August 2nd.
◗ Say one “Our Father” and the “Apostles Creed”.
◗ Say one “Our Father” and one “Hail Mary” for the Holy Father’s  intentions (the intentions designated by the Holy Father each month).
◗ Make a sacramental confession within 20 days.
◗ For a plenary indulgence, be free from all attachment to sin, even  venial sin (or the indulgence is partial, not plenary).

Permanent link to this article: https://www.bookofheaven.net/2016/08/02/plenary-indulgence-of-the-forgiveness-of-assisi-august-2/