Prayer needed for President Trump against the Occult!

Letter from the new Postulator of the Cause of Luisa Piccarreta 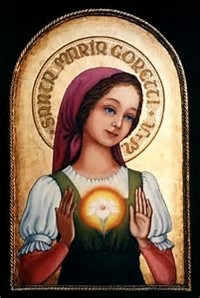 She is know as the young Saint of Modesty, Pledge, and Prayers

Roman Catholic Saint. The third of six children of a poor couple who rose to become one of the twentieth century’s youngest yet most famous saints, Maria Goretti was born in Corinaldo in the then Kingdom of Italy, to Luigi Goretti and Assunta Carlini. Forced to give up their farm due to their impoverishment, Maria’s parents moved to Le Ferriere and Nettuno to work for other farmers, were they lived in a building knows as “La Cascina Antina” which they shared with another family which included Giovanni Serenelli and his adult son, Alessandro.

After the early death of her father, her mother and siblings worked on the fields, while she cooked, sewn and took care of the house chores.

On July 5, 1902, finding eleven-year-old Maria alone sewing, Alessandro came in and threatened her with death if she did not do as he said, his intent being that of raping her. Maria would not submit, protesting that what he wanted to do was a mortal sin and warning Alessandro that he would go to hell. Desperately fighting to stop him from abusing her, Alessandro first choked Maria, but when she insisted she would rather die than submit to him, he stabbed her eleven times. The injured Maria tried to reach for the door, but Alessandro stopped her by stabbing her three more times before running away. Awaken by the noise Maria’s little sister, Teresa, started crying, and when Serenelli’s father and Maria’s mother came to check on the little girl, they found Maria bleeding severely, taking her straight away to the nearest hospital in Nettuno. Undergoing surgery without anesthesia, her injuries were beyond the doctors’ help. Halfway through the surgery, Maria woke up and insisted to stay that way. The pharmacist of the hospital in which she died said to her, “Maria, think of me in Paradise.” She looked to the old man: “Well, who knows, which of us is going to be there first?” “You, Maria,” he replied. “Then I will gladly think of you,” said Maria. The following day, twenty hours after the attack, having expressed forgiveness for her murderer and stating that she wanted to have him in heaven with her, Maria died of her injuries.

Alessandro Serenelli was captured shortly afterwards. About to be sentenced to life, since he was a minor at that time, the sentence was commuted to thirty years in prison. He remained unrepentant and uncommunicative from the world for three years, until the local bishop, Monsignor Giovanni Blandini, visited him in jail. Serenelli wrote a thank you note to the Bishop asking for his prayers and telling him about a dream, “in which Maria Goretti gave him lilies, which burned immediately in his hands.” After his release, Alessandro Serenelli visited Maria’s mother, Assunta, begging her forgiveness. She forgave him, saying that if Maria had forgiven him on her deathbed then she couldn’t do less, and they attended Mass together the next day, receiving Holy Communion side by side.

Alessandro reportedly prayed every day to Maria and referred to her as “my little saint” and eventually became a lay brother of the Order of Friars Minor Capuchins, living in a monastery, serving as receptionist and gardener until dying peacefully in 1970. On the evening of the beatification ceremonies in the Saint Peter’s Basilica, April 27, 1947, Pope Pius XII walked over to Assunta. She almost fainted. “When I saw the Pope coming, I prayed, Madonna, please help me. He put his hand on my head and said, blessed mother, happy mother, mother of a blessed!” They both had eyes wet with tears. It was the first time in centuries, that a mother was present for one of her children’s beatification, the previous case being that of Margaret de Drobniy Kryska at her son Stanislaus Kostka’s beatification back in 1604.

On June 24, 1950, Pius XII canonized Goretti with Assunta being again present at the ceremony, along with her four remaining sons and daughters, becoming the second mother in history to attend the canonization ceremony of her child, the first being Luigi Gonzaga’s mother in the sixteenth century. Alessandro Serenelli was also present at the canonization. Owing to the huge crowd present, the ceremony was held outside Saint Peter’s Basilica in Piazza San Pietro with Pius XII speaking in Italian rather the usual custom in Latin. Her body is kept in the crypt of the Basilica of Santa Maria delle Grazie e Santa Maria Goretti in Nettuno, south of Rome. With her liturgical feast day celebrated on July 6, she is hailed as the patron saint of chastity, rape victims, youth, teenage girls, poverty, purity and forgiveness.

Permanent link to this article: https://www.bookofheaven.net/2017/06/27/novena-to-st-maria-goretti-begins-627/