The Archbishop of Trani-Barletta-Bisceglie, Mons. Giovan Battista Pichierri left for the Father’s house 7/26/17 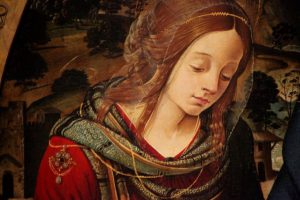 ST MARY MAGDALEN (FIRST CENTURY)
The story of St. Mary Magdalen, as generally received in the West following St. Gregory the Great, is one of the most moving and encouraging in the Holy Scriptures. Mention is made in the gospels of a woman who was a sinner (Luke vii 37-50, etc.), of Mary Magdalen, a follower of our Lord (John xx 10-18, etc.), and of Mary of Bethany, the sister of Lazarus (Luke x 38-42, etc.), and the liturgy of the Roman church by identifying these three as one single individual has set its approval on the ancient

from Magdala, a place on the western shore of the sea of Galilee, near to Tiberias, and our Lord first met her when on His Galilean ministry. St. Luke records that she was a sinner, and evidently a notori- ous sinner (though he says nothing to suggest that she was a public harlot, as is commonly supposed), and goes on to describe how, Christ having accepted an invitation to dine with a Pharisee, she came into the house while they were at table, fell weeping before Jesus, and, having wiped His feet with her own hair, anointed them with ointment from an alabaster box. The Pharisee murmured at what seemed to him the unbecoming acquiescence of a prophet in the presence of a great sinner, and Jesus, knowing his thoughts, rebuked him; first by asking which of two released debtors, a great and a small, had the more cause to be grateful to their creditor, and then directly:

“Dost thou see this woman? I entered into thy house—thou gavest me no water for my feet. But she with tears hath washed my feet, and with her hairs hath wiped them. Thou gavest me no kiss. But she, since she came in, hath not ceased to kiss my feet. My head with oil thou didst not anoint—but she with ointment hath anointed my feet. Wherefore I say to thee: Many sins are forgiven her, because she hath loved much. But to whom less is forgiven, he loveth less.” And to the penitent woman he said, “Thy sins are forgiven thee. Thy faith hath made thee safe. Go in peace.”

In his very next chapter St. Luke, in speaking of the missionary travels of our Lord in Galilee, tells us that He and His apostles were accompanied and ministered to by certain women, among them (by name) Mary Magdalen, “out of whom seven devils had gone forth.” Later, He entered into a certain town and was received by Martha and her sister Mary, who supposedly had come to live with their brother Lazarus at Bethany in order to be nearer the Master who, at their instance, had restored him to life. Martha, busy about the house, appealed to Him to urge Mary to help her, rather than to sit continu- ally at His feet listening to His words, and received that answer which has puzzled and consoled all succeeding ages: “Martha, Martha, thou art careful and art troubled about many things. But one thing is necessary. Mary hath chosen the best part, which shall not be taken away from her.” Mary the sinner had become Mary the contemplative.

On the day before the triumphal entry into Jerusalem which was the prelude to His passion, Jesus supped with the family of Lazarus at Bethany (Jesus loved them, St. John tells us), and on this occasion Mary again anointed His head and feet and wiped them with her hair, so that “the house was filled with the fragrance of the ointment.” And again there was a critic present, this time Judas Iscariot the apostle,

scandalized not because he was self-righteous but because he was dishonest and avaricious; and even the other disciples were distressed at what seemed a waste. And again Jesus vindicated Magdalen:

“Let her alone! Why do you molest her? She hath wrought a good work upon me. For the poor you have always with you, and whensoever you will you may do them good; but me you have not al- ways. She hath done what she could: she is come beforehand to anoint my body for the burial. Amen, I say to you—wheresoever this gospel shall be preached in the whole world, that also which she hath done shall be told for a memorial of her.” “And behold!” says St. John Chrysostom, “what He said has come to pass. Wherever you go you will hear her praises sung…. The dwellers in Persia, in India… in the British isles celebrate this deed.”

And yet Mary Magdalen is remembered at least as well for other things. In the darkest hour of our Lord’s life she stood at some distance, watching Him on the cross; and with “the other Mary” she saw the great stone rolled before the door of the tomb wherein lay the body of the Lord. But the crowning mercy of the life of Mary Magdalen was yet to come, for it was she who, bearing sweet spices and weeping by the sepulchre early on the first day of the week, was the first to see, to be greeted by, and to recognize, the risen Christ; she, the contemplative, was the first witness to that resurrection without which our faith and our preaching are alike vain; it was to the abused flesh of the penitent that the radi- ant and glorified body of the Son of God was first made manifest.

According to Eastern tradition, Mary Magdalen after Pentecost accompanied our Lady and St. John to Ephesus where she died and was buried; the English pilgrim St. Willibald was shown her shrine there in the middle of the eighth century. But according to the tradition of France, in the Roman Marty- rology and by the granting of various local feasts, she, with Lazarus, Martha, and others, evangelized Provence. The last thirty years of her life, it is claimed, she spent in a cavern of a rock, La Sainte Baume, high up among the Maritime Alps, to be transported miraculously, just before she died, to the chapel of St. Maximin; she received the last sacraments from and was buried by that saint.

The earliest known reference to the coming of the Palestinians to France is of the eleventh cen- tury, in connection with the relics of St. Mary Magdalen claimed by the abbey of Vézelay in Burgundy; the elaborations of the story seem to have spread in Provence only during the thirteenth. From 1279 the relics of the Magdalen are said to be in the keeping of the monks of Vézelay and of the Dominican fri- ars of Saint-Maximin, to the shrine in which church and the cave at La Sainte Baume pilgrimage is still popular. But research, especially by Mgr.. Duchesne, has demonstrated more and more clearly that nei- ther the relics nor the story of the voyage of the friends of our Lord to Marseilles can be relied on as authentic; in spite of the defence of those piously concerned on behalf of the local belief, it cannot be doubted that the whole story is a fabrication.

Among the other curious and baseless tales current about the saint in the middle ages is that she was affianced to St. John the Evangelist when Christ called him. “She had thereof indignation that her husband was taken from her, and went and gave herself to all delight; but because it was not fitting that the calling of St. John should be the occasion of her damnation, therefore our Lord mercifully con- verted her to penance, and because He had taken from her sovereign delight of the flesh, He replen- ished her with sovereign spiritual delight before all other, that is, the love of God” (The Golden Leg- end).

Permanent link to this article: https://www.bookofheaven.net/2017/07/22/feast-of-st-mary-magdalen/