The Archbishop of Trani-Barletta-Bisceglie, Mons. Giovan Battista Pichierri left for the Father’s house 7/26/17

OUR SHEPHERD LEFT FOR OUR FATHER’S HOUSE

Public announcement of the Archdiocese of Trani-Barletta-Bisceglie 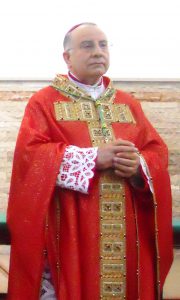 Today morning, around 8.30 am, Mons. Giovan Battista Pichierri, Archbishop of Trani-Barletta-Bisceglie, was found without life. Probably he was going to wash himself when he was suddenly taken ill. The sisters who lived with him around 8.30, did not see him coming, so they called him, but they made the sad discovery. A priest acted immediately and called  for help.  The rescues came up promptly,  but the various attempts  to reanimate him had not any positive effect.

Mons. Giuseppe Pavone, Vicar General, invites the whole ecclesial community to pray “for our Father and Shepherd who was just about to celebrate the 50th anniversary of his priestly ordination, all dedicated to serving the Church.”

During the morning the guesthouse of the Archbishop was the destination of so many people, especially priests and relatives of Mons. Pichierri. The body was arranged and placed in the burial chamber, located in the hall of the second floor of the Archbishop’s palace in Trani. It will remain there until 10.00 on Thursday  July 27. Then, it will be transferred to the Church of St. John the Baptist in Trani: here, in the evening, a prayer vigil will take place at 8:30 p.m. and on Friday July 28 at 13.00, the clergy will recite the Little Hours; Subsequently, the corpse will be transferred to the Cathedral of Trani, where the Celebration of the funeral will take place at 4:00 pm. The Holy Mass will be presided over by His Eminence Cardinal Salvatore De Giorgi.

After studying at the diocesan and regional Seminary in Molfetta, he was ordained a priest in the diocese of Oria (BR) on August 30, 1967. He completed his theological education by attending the Ecumenical Theology in Bari, where in 1970 he obtained the degree in Ecumenical Theology.

The first ten years of his priestly ministry were at the service of the Diocesan and Regional Minor Seminaries  for  the High School in Taranto. In the latter one at first as an animator and then as a rector.

When he returned to the diocese in 1977, he served the diocesan church collaborating directly with Bishop De Giorgi and Bishop Franco, and in the interval of the succession between these two bishops he was delegate “ad Omnia”  of  the Apostolic Administrator Voto, Bishop of Castellaneta.

Since 1982, Mons. Armando Franco appointed him as an archpriest, and entrusted to him the pastoral care of the  Church “Santissima Trinità” in Manduria, that he served until March 12, 1991.

In 1986, Mons. Franco himself called him to cooperate more directly to lead the diocese, entrusting  to him the task of Vicar General and Moderator of the Curia.

Throughout the years of his ministry he taught Catholic Religion in State Schools: middle and high School, Gymnasium, Commercial Institutes, Scientific High School.

On 21 December 1990 the Holy Father John Paul II chose him as Bishop of the Diocese of Cerignola-Ascoli Satriano (FG).

On January 26, 1991 he was ordained Bishop in the Mother Church of Manduria (Ta) by the diocesan Bishop, Mons. Armando Franco. On March 17, 1991, he entered the diocese,

On November 13, 1999, the Holy Father John Paul II transferred him to the archbishopric of Trani-Barletta-Bisceglie and Nazareth (Ba).

The entry into the new diocese took place on January 26, 2000, the ninth anniversary of his episcopal ordination.

It is difficult to condense in a few lines a bishopric  that  was so full of commitment and teaching.

The relevant pastoral documents were about thirty. They, considered in a synoptic view, give an idea of the depth of the pastoral interests he pursued: the guidelines for the permanent diaconate (2000); Statute and rules of the Episcopal Curia (2000); The parish as a cell and pastoral subject (2001), the parish as a missionary eucharistic community (2002), the parish as a missionary ecumenical community (2005);  on the instituted ministries. (2002); about family and youth (2002); On engagement (2005); On pastoral visit (2005); On the Institute of Religious Studies (2007); On the formation of the diocesan presbytery (2007); On the importance of listening to the Word of God (2008); On the deeper meaning of the Church as House of Hope (2007) and with a Maternal Face (2008); On the Pastoral Care of Wounded Families (2009), and the list goes on.

His service was multifaceted: for teaching, sanctification, pastoral service, for the cause of ecumenism, creation of charity works in the seven cities of the diocese.

The First Diocesan Synod was his last pastoral choice that he wished and accomplished in several years. It was issued on October 19, 2012, on the theme “For the Church,  a mystery of communion and mission”.  “It is celebrated under the action of the Holy Spirit”  as he used to say at the preparation stages, during the time of reflection and discussion about the instrument of work, and in the election assemblies (2013-2015). The Synod ended on October 30 2015. On January 26, 2016, on the XXV anniversary of his episcopal ordination, he promulgated the Synodal Book. Since then, he worked with his collaborators to realize the guidelines of the Synodal Book: the reform of the curia, creation of a formation school for pastoral workers, establishment of a diocesan service for families in crisis, the summons of a diocesan conference to verify the path accomplished after the synod.

More recently, he was preparing for the celebration of the fiftieth anniversary of his priestly ordination, in the name of sobriety and prayer. For that occasion he wanted to send to the diocesan community a letter that will be made known in a few days, in which, among other things, he wrote:

“We have come to the time of physical farewells: on February 12, 2018, I will be 75 years old and, according to Can. 401 of the Code of Canon Laws, I am required to put the episcopal mandate into the hands of the Holy Father Francis. I do this with serenity of spirit and as a act of love towards the Holy Church of Trani-Barletta-Bisceglie, so that it can continue to grow in Jesus Christ, our good and beautiful pastor, under the guidance of the one whom the Holy Father will elect and send as my successor. What I feel I have to write to you is not my last will, but a warm exhortation to remain in God’s love, just as our teacher Jesus asks us: “Remain in my love!” (John 15: 9) . (…) About pastoral commitment: Please consider the diocesan synod we celebrated as the “magna carta” to follow, for the diocesan pastoral ministry,  improving it, step by step under the new guidance of the Archbishop who you will have as a gift .

Beloved, let the Archbishop, my successor,  know  what we experienced in Christ Jesus under the action of the Holy Spirit,  through your synodal ecclesial lifestyle. The new Shepherd will come to serve and grow with you ‘by every supporting ligament ‘(Ephesians 4:16)  of the mystical body of Christ. ”

And, in an interview with the monthly diocesan “In Communion,” when he was asked if he wanted to talk about a subject he had not been asked before, he said:

“I leave the Archdiocese of Trani-Barletta-Bisceglie to enter  my diocese of origin, Oria, and live  in my native town, Sava. I have  a” dream “that I wish and ask the Lord to be able to accomplish it: to work to return the presence of consecrated people to Sava. Let me explain. In Sava, there were the minor Franciscan friar who had created some works of charity. The Sisters of Charity of St. Vincent and  St. Luisa de Marillac who had thaught many generations of children and girls in the “Daughters of Mary”, and had taken care of the poor by helping the “Ladies of Charity”; The Daughters of Mary Help of Christians, worthy for the equalized primary and secondary school. Now, Sava, is lacking in the precious presence of Consecrated Life. So, with the help of God and the cooperation of the brothers and sisters who are engaged in associations and volunteering, supported by the Diocesan Bishop and civil authorities, I would like to set up a ” House of Tenderness ” in a significant place in the city and entrust it to a community of consecrated life, held by myself, by the priests of the city, by the Volunteers. That would be a miracle! Therefore, I ask the prayer of the beautiful diocesan church of Trani-Barletta-Bisceglie that I carry in my heart. Thank you!”

Permanent link to this article: https://www.bookofheaven.net/2017/07/27/update-on-archbishop-battista-pichrerri/