“I expand the circle, and, like a fisherman, I catch those who must serve Me for the Kingdom of the Divine Will.” 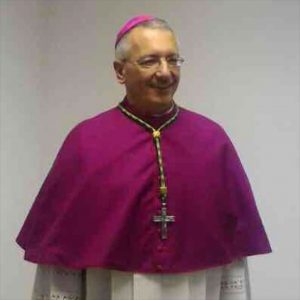 On Sunday January 14,  2018, at 4:30 p.m., at the sports hall “S. Bandinelli “in Velletri, there was the Eucharistic Celebration for the Episcopal Ordination of Msgr Leonardo D’Ascenzo who was elected Archbishop of our Diocese (Trani-Barletta-Bisceglie).

The celebration was presided by Msgr. Vincenzo Apicella, bishop of Velletri-Segni (the main officiator) and by numerous bishops of Lazio and Puglia, including the Archbishop of Bari, Msgr. Francesco Cacucci and the bishop of Anagni-Alatri Msgr. Lorenzo Loppa, serving as co-consecrators.

All the liturgy of ordination was sober, authoritative and full of emotions, and after the imposition of hands and the prayer of ordination, Msgr. Apicella oiled Msgr. Leonardo with the Sacred Chrism and with great emotion by all there was the delivery of the Gospel, of the ring, of the miter, and of the pastoral.

The rite ended with the first blessing of Msgr. Leonardo, who with great amazement and general emotion, made himself small among us climbing up the terraces of the sports hall to symbolically embrace all of us

“You can imagine how I was deeply surprised – Msgr. D’Ascenzo continued – when I learned that the readings of tonight would have been those that are considered texts with an evident vocational content.  Reflecting on this Word of God, I was able to get some of my similarities with the biblical character of Samuel in particular his ability to return to sleep at least three times after being awakened during the night. Like him, I’m very good at sleeping, I think I look like him. I hope to be like him in the availability to the call, in the capacity to grow and not to let a single Word of the Lord fall into emptiness”. Archbishop D’Ascenzo stole a smile and applause with a frank and reassuring air that convinced the more than 1500 participants in the celebration at the sports hall.

That was the wish for don Leonardo, rector of the Seminary of Anagni, now called to lead the new community of Puglia. Bishop Apicella continued: “we often get confused between voices and bells: we seek the first places, the greetings in the squares, the titles, the honors, but we forget that Christ is the center, and that we as disciples must make us small, servants, and occupy the last place. It is an apprenticeship that lasts a lifetime. Precisely in the logic of the parish, Don Leonardo could experience that the logic of service is the meaning of life”. Bishop Apicella concluded: “Don Leonardo is a true man, that is, he loves the truth, even if it is inconvenient, he tells the truth, he does the truth. We are sure that he will be a true shepherd for the people who is awaiting him and we wish him in his presbytery as many priests as those he educated in the Seminary of Anagni. ”

“We will walk together, in communion, in search of what God has in His heart for us, a portion of His people at the school of the Gospel. Supported by the Eucharist, we trust in the maternal intercession of Mary, Mother of Graces, to be the beginning of a renewed experience with Jesus”. The  new ordained archbishop concluded with those words taking leave of the assembly.

At the end of his episcopal ordination, Msgr. D’Ascenzo greeted his community of origin and all those who had been close to him in these years, his whole family, in particular his father Giairo. Almost all the 19 bishops of Puglia were present, about 700 representatives of the Church of Trani-Barletta-Bisceglie, as well as civil authorities and mayors. Archbishop D’Ascenzo will officially enter the Archdiocese of Trani-Barletta-Bisceglie on January 27.

The celebration, thanks to the descent of the Holy Spirit, was enriched with love. It gripped the new Bishop and his faithful in an embrace so rich in love that we cried with joy.

We thank the Lord for this great gift that He has given us. May He bless, enlighten and protect our Shepherd in sharing his life with ours.

It is our necessary duty, as sons and daughters of the Divine Will, to commit ourselves to pray for our new Archbishop Leonardo, so that he can, as his predecessors did  (Bishops Carata, Cassati and Pichierri), accompany the last stretch (we hope) of the journey for the beatification of the Servant of God Luisa Piccarreta. We are aware that God, in order to carry out His work, uses His ministers so that the Kingdom of the Divine Will  can spread and build up His Church, just as Jesus Himself told Luisa on January 18, 1928: “My daughter, all of my works hold hands, and this is the sign that they are my works – that one does not oppose the other; on the contrary, they are so bound among themselves, that they sustain one another… With my coming upon earth, I did not destroy Sacred Scriptures; on the contrary, I supported them; and my Gospel, which I announced, opposed them in nothing; on the contrary, they sustained each other in an admirable way. And in forming the new nascent Church, I formed the new priesthood, which does not detach itself either from Sacred Scriptures or from the Gospel. All are intent upon them…Now, that which I manifest on my Divine Will, and which you write, can be called ‘the Gospel of the Kingdom of the Divine Will’. In nothing does It oppose either Sacred Scriptures or the Gospel which I announced while being on earth; on the contrary, It can be called the support of one and of the other. And this is why I allow and I call priests to come – to read the Gospel, all of Heaven, of the Kingdom of my Divine Fiat, so as to say, as I said to the Apostles: ‘Preach It throughout the whole world.’ In fact, in my works I make use of the priesthood; and just as I had the priesthood before my coming in order to prepare the people, and the priesthood of my Church in order to confirm my coming and everything I did and said, so will I have the priesthood of the Kingdom of my Will…

And I enjoy that more of my ministers get to know that there is this treasure so great, of making known the Kingdom of my Divine Will; and I use this to form the first priests of my coming Kingdom of my Fiat. My daughter, it is a great necessity to form the first priests; they will serve Me like the Apostles served Me to form my Church; and the ones who will occupy themselves with these writings in order to publish them, putting them out to print them – to make them known, will be the new evangelists of the Kingdom of my Supreme Will… Therefore, in these circumstances I expand the circle, and, like a fisherman, I catch those who must serve Me for a Kingdom so holy. Therefore, let Me do, and do not be worried.”

Permanent link to this article: https://www.bookofheaven.net/2018/01/17/i-expand-the-circle-and-like-a-fisherman-i-catch-those-who-must-serve-me-for-the-kingdom-of-the-divine-will/