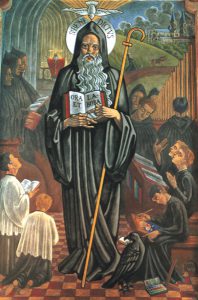 St. Benedict is believed to have been born around 480, as the son to a Roman noble of Norcia and the twin to his sister, Scholastica.

In the fifth century, the young Benedict was sent to Rome to finish his education with a nurse/housekeeper. The subject that dominated a young man’s study then was rhetoric — the art of persuasive speaking. A successful speaker was not one who had the best argument or conveyed the truth, but one who used rhythm, eloquence, and technique to convince. The power of the voice without foundation in the heart was the goal of the student’s education. And that philosophy was reflected in the lives of the students as well. They had everything — education, wealth, youth — and they spent all of it in the pursuit of pleasure, not truth. Benedict watched in horror as vice unraveled the lives and ethics of his companions.

Afraid for his soul, Benedict fled Rome, gave up his inheritance and lived in a small village with his nurse. When God called him beyond this quiet life to an even deeper solitude, he went to the mountains of Subiaco. Although becoming a hermit was not his purpose in leaving, there he lived as a hermit under the direction of another hermit, Romanus.

One day, during his time living in a cave above a lake as a hermit, the Devil presented Benedict’s imagination with a beautiful, tempting woman. Benedict resisted by rolling his body into a thorn bush until it was covered in scrapes. It is said through these body wounds, he cured the wounds of his soul.

After years of prayer, word of his holiness brought nearby monks to ask for his leadership. He warned them he would be too strict for them, but they insisted — then tried to poison him when his warning proved true. The story goes, the monks attempted to poison Benedict’s drink, but when he prayed a blessing over the cup – it shattered.

So Benedict was on his own again — but not for long. The next set of followers were more sincere and he set up twelve monasteries in Subiaco where monks lived in separate communities of twelve.

He left these monasteries abruptly when the envious attacks of another hermit made it impossible to continue the spiritual leadership he had taken.

But it was in Monte Cassin

o he founded the monastery that became the roots of the Church’s monastic system. Instead of founding

small separate communities he gathered his disciples into one whole community. His own sister, Saint Scholastica, settled nearby to live a religious life.

After almost 1,500 years of monastic tradition his direction seems obvious to us. However, Benedict was an innovator. No one had ever set up communities like his before or directed them with a rule. What is part of history to us now was a bold, risky step into the future.

Benedict had the holiness and the ability to take this step. His beliefs and instructions on religious life were collected in what is now known as the Rule of Saint Benedict — still directing religious life after 15 centuries.

In this tiny but powerful Rule, Benedict put what he had learned about the power of speaking and oratorical rhythms at the service of the Gospel. He did not drop out of school because he did not understand the subject! Scholars have told us that his Rule reflects an understanding of and skill with the rhetorical rules of the time. Despite his experience at school, he understood rhetoric was as much a tool as a hammer was. A hammer could be used to build a house or hit someone over the head. Rhetoric could be used to promote vice … or promote God. Benedict did not shun rhetoric because it had been used to seduce people to vice; he reformed it.

Benedict did not want to lose the power of voice to reach up to God simply because others had use it to sink down to the gutter. He reminded us “Let us consider our place in sight of God and of his angels. Let us rise in chanting that our hearts and voices harmonize.” There was always a voice reading aloud in his communities at meals, to receive guests, to educate novices. Hearing words one time was not enough — “We wish this Rule to be read frequently to the community.”

Benedict realized the strongest and truest foundation for the power of words was the Word of God itself: “For what page or word of the Bible is not a perfect rule for temporal life?” He had experienced the power of God’s word as expressed in Scripture: “For just as from the heavens the rain and snow come down and do not return there till they have watered the earth, making it fertile and fruitful, giving seed to him who sows and bread to him who eats, so shall my word be that goes forth from my mouth; It shall not return to me void, but shall do my will, achieving the end for which I sent it” (Isaiah 55:10-11).

For prayer, Benedict turned to the psalms, the very songs and poems from the Jewish liturgy that Jesus himself had prayed. To join our voices with Jesus in praise of God during the day was so important that Benedict called it the “Work of God.” And nothing was to be put before the work of God. “Immediately upon hearing the signal for the Divine Office all work will cease.” Benedict believed with Jesus that “One does not live by bread alone, but by every word that comes forth from the mouth of God’ ” (Matthew 4:4).

But it wasn’t enough to just speak the words. Benedict instructed his followers to practice sacred reading — the study of the very Scriptures they would be praying in the Work of God. In this lectio divina, he and his monks memorized the Scripture, studied it, and contemplated it until it became part of their being. Four to six hours were set aside each day for this sacred reading. If monks had free time it “should be used by the brothers to practice psalms.” Lessons from Scripture were to be spoken from memory not read from a book. On Benedict’s list of “Instruments of Good Works” is “to enjoy holy readings.”

In one story of Benedict’s life, a poor man came to the monastery begging for a little oil. Although Benedict commanded that the oil be given, the cellarer refused — because there was only a tiny bit of oil left. If the cellarer gave any oil as alms there would be none for the monastery. Angry at this distrust of God’s providence, Benedict knelt down to pray. As he prayed a bubbling sound came from inside the oil jar. The monks watched in fascination as oil from God filled the vessel so completely that it overflowed, leaked out beneath the lid and finally pushed the cover off, cascading out on to the floor.

In Benedictine prayer, our hearts are the vessel empty of thoughts and intellectual striving. All that remains is the trust in God’s providence to fill us. Emptying ourselves this way brings God’s abundant goodness bubbling up in our hearts, first with an inspiration or two, and finally overflowing our heart with contemplative love.

Benedict died on 21 March 543, not long after his sister. It is said he died with high fever on the very day God told him he would. He is the patron saint of Europe and students.

Permanent link to this article: https://www.bookofheaven.net/2019/07/11/feast-of-saint-benedict-july-11/