Feast of the Transfiguration August 6, 2019

The Feast of God The Father of All Mankind

God The Father – All Powerful Father 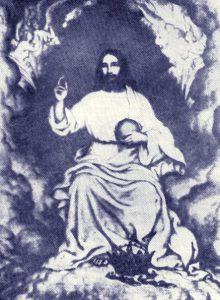 Mother Eugenia asked a famous painter to paint a picture of the Father just as she had seen Him: with long black hair, dark eyes, without a beard, with a sceptre and a crown at His feet. Later, His face was touched up by adding a thick, black beard.

Bishop Approves the Apparition of God The Father

“I desire only this: that one day, or at least a Sunday, be dedicated to me under the title of Father of All Mankind.” – The Eternal Father To Mother Eugenia Elisabetta Ravasio on July 1, 1932, the Feast of the Precious Blood of Our Lord Jesus Christ.

In 1932, an extraordinary event occurred. A nun named Mother Eugenia Ravasio reported that God the Eternal Father appeared to her on two separate occasions. The first time was on July 1, 1932. The second time was on August 12, 1932. After a ten year investigation, the Church approved the apparition.

According to the book, “God is Father,” there was beautiful singing, incomprehensible harmony, and finally the appearance of the Eternal Father. Mother Eugenia stated that God our Father sat next to her to reveal His great love for His children. He also stated that He desired a feast in His honor. God our Father gave this message to Mother Eugenia in Latin, a language totally unknown to her.

In our opinion, Mother Eugenia is one of the greatest lights in our times, the little prophet of a new Church, in which the Father is the center and apex of all mankind, and in which unity is the highest ideal of spirituality. She is a light given by the Father to the world at this time of chaos and darkness, so that we may see the road that has to be followed.

She was born in San Gervasio d’Adda, a small town in the province of Bergamo, Italy, on September 4th, 1907, in a family of peasant background. Quite apart from her spiritual qualities, her work in the social field alone would suffice to ensure her a place in history. In twelve years of missionary activity she opened over 70 centers – each with infirmary, school and church – in the remotest spots of Africa, Asia and Europe. Mother Eugenia returned to the Father on August 10th, 1990.

In 1935, Bishop Alexander Caillot of Grenoble, France, convened a Commission of Inquiry to investigate the report. The commission took ten years to complete its work. In his final report, Bishop Caillot stated that Mother Eugenia had reflected great piety, humility and obedience during the 10 year investigation. She endured many trials and displayed outmost docility while submitting to the Inquiry. The following is a brief summary of the Bishop’s approval:

“Following the dictates of my soul and my conscience, and with the keenest sense of my responsibility to the Church, I declare that the supernatural events and divine intervention seems to me the only logical and satisfactory answer of the facts. Isolated from all the surrounding features of the case, this essential fact seems to me to be noble, lofty and supernaturally rich: that a humble nun has called souls to true devotion to the Father, such as Jesus taught and the Church has enshrined in its liturgy. There is nothing alarming in this, only something that is simple and in accordance with solid doctrine. I deem it proper to let her continue her work. I believe that the hand of God is in all this. After ten years of research, reflection, and prayer, I bless the Father for having deigned to choose my diocese as the place for such touching manifestations of His love.”