Feast of the Assumption of the Blessed Virgin Mary

Consecration for these End Times

Queenship of the Blessed Virgin Mary 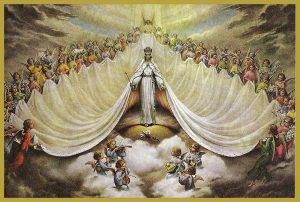 Our Blessed Mother – Queen of the Universe

Mary’s Queenship is first based on her maternal relationship with Jesus. The ancient Hebraic notion of the Queen Mother applies to Mary as Mother of the Messianic King, Jesus Christ. In ancient Israel, the most important woman in the monarchy was generally the queen mother, not the queen. In the southern kingdom of Judah, the kings’ wives were apparently never “queens.” It was the queen mother (Hebrew, gebira or “Great Lady”), the king’s mother, who was honored and who wielded authority as a counselor to the king.

Then he sat down upon his throne, and a throne was provided for the king’s mother, who sat at his right. – Kings 2:19

The Queen Mother standing at the king’s right hand, arrayed in gold. – Psalm 45:9

Hebrews 1:8-9 applies this psalm to Jesus as Messianic King. By extension, Psalm 45:9 would then apply prophetically to the Messianic King’s Mother, Mary.

He (Jesus) said to them, ‘Very well; you shall drink my cup, but as for seats at my right hand and my left, these are not mine to grant; they belong to those to whom they have been allotted by my Father.’ – Matthew 20:23

The two supports of Jesus in Gethsemane. (Our Lady on the His right, the Servant of God Luisa Piccarreta on His left) – I was keeping company with my Jesus who was agonizing in the Garden of Gethsemane, and as much as I could, I compassionated Him, I pressed Him tightly to my heart, trying to wipe His mortal sweats. And my sorrowful Jesus, with faint and expiring voice, told me: “My daughter, my agony in the garden was hard and painful, maybe more painful than that of the Cross. In fact, if that was the fulfillment and the triumph over all, here in the garden it was the beginning, and sufferings are felt more at the beginning than when they are ended. But in this agony the most harrowing pain was when all sins came before Me, one by one. My Humanity comprehended all their enormity, and each crime carried the mark, ‘Death to a God’, armed with sword to kill Me! Before the Divinity, sin appeared to Me as so very horrifying and more horrible than death itself. Just in comprehending what sin means, I felt I was dying – and I did really die. I cried out to the Father, but He was inexorable. Not even one was there to help Me, so as not to let Me die. I cried out to all creatures to have pity on Me – but in vain. So, my Humanity languished, and I was about to receive the last blow of death.

But do you know who prevented the execution and sustained my Humanity from dying? The first was my inseparable Mama. In hearing Me ask for help, She flew to my side and sustained Me; and I leaned my right arm on Her. Almost dying, I looked at Her, and I found in Her the immensity of my Will intact, without ever a break between my Will and hers. My Will is Life, and since the Will of the Father was immovable and death was coming to Me from creatures, another Creature, who enclosed the Life of my Will, gave Me Life. And here is my Mama who, in the portent of my Will, conceived Me and gave Me birth in time, now giving Me Life for the second time to let Me accomplish the work of Redemption.

Then I looked to my left, and I found the Little Daughter of my Will. I found you (Luisa Piccarreta) as the first, followed by the other daughters of my Will. Since I wanted my Mama with Me as the first link of Mercy, through which we were to open the doors to all creatures, I wanted to lean my right arm on Her. And I wanted you as the first link of Justice, to prevent It from unloading Itself upon all creatures as they deserve; therefore I wanted to lean my left arm on you, so that you might sustain It together with Me.

With these two supports I felt life come back to Me, and as if I had not suffered anything, with firm step, I went to meet my enemies. In all the pains that I suffered during my Passion, many of which were capable of giving Me death, these two supports never left Me. And when they saw Me nearly dying, with my own Will which they contained, they sustained Me, as though giving Me many sips of life. Oh, prodigies of my Will! Who can ever count them and calculate their value? This is why I love so much one who lives in my Will: I recognize my portrait in her, my noble features; I feel my own breath, my voice; and if I did not love her I would defraud Myself. I would be like a father without offspring, without the noble cortege of his court, and without the crown of his children. And if I did not have the offspring, the court and the crown, how could I call Myself a King? My Kingdom is formed by those who live in my Will, and from this Kingdom, I choose the Mother, the Queen, the children, the ministers, the army, the people. I am everything for them, and they are all for Me.”

Permanent link to this article: https://www.bookofheaven.net/2019/08/22/queenship-of-the-blessed-virgin-mary/