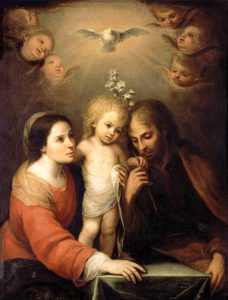 The First Hour of Sorrow Sounds. A Star, with mute Voice, calls the Magi to adore Jesus. A Prophet makes himself the Revealer of the Sorrows of the Sovereign Queen.

The soul to her Queen Mama:

My Most Sweet Mama, here I am again at Your knees; this daughter of Yours can no longer be without You, my Mama. The Sweet Enchantment of the Celestial Baby, whom You now clasp in Your arms, and now kneeling Adore and Love in the manger, enraptures me, thinking that Your Happy Destiny and the same Little King Jesus are nothing other than the Fruits and the Sweet and Precious Pledges of that Fiat which extended Its Kingdom in You. O please! O Mama, give me Your Word that You will make use of Your Power to form in me the Kingdom of the Divine Will.

Lesson of my Celestial Mama:

My dearest daughter, how Happy I am to have you close to Me, to be able to teach you how the Kingdom of the Divine Will can extend in all things. All crosses, sorrows, humiliations, invested by the Life of the Divine Fiat, are like raw materials in Its Hands, in order to Nourish Its Kingdom and to Extend It more and more.

Therefore, pay attention to Me, and listen to your Mama. I continued My stay in the grotto of Bethlehem with Jesus and dear Saint Joseph. How Happy we were. Because of the Divine Infant and of the Divine Will Operating in us, that little grotto had changed into Paradise. It is true that pains and tears were not lacking, but compared to the Immense Seas of Joy, of Happiness, of Light, which the Divine Fiat made arise in each of our acts, they were just little drops plunged into these Seas. And then, the Sweet and Lovable Presence of My Dear Son was one of My Greatest Happinesses.

Now, dear daughter, you must know that the eighth day arrived after the Celestial Baby had been Born to the light of the day, and the Divine Fiat sounded the hour of sorrow, commanding us to circumcise the charming Little Baby. It was a most painful cut which Little Jesus was to undergo. It was the law of those times that all the firstborn had to undergo this painful cut. It can be called the law of sin, but My Son was Innocent and His Law was the Law of Love; but in spite of this, because He came to find, not the man-king, but the man degraded, in order to make Himself his brother and to elevate him, He wanted to lower Himself, and He submitted Himself to the law.

My daughter, Saint Joseph and I felt a shiver of pain, but intrepid and without hesitating, we called the minister and we had Him circumcised with a most painful cut. At the bitter pain, Baby Jesus cried and flung Himself into My arms, asking for My Help. Saint Joseph and I mixed our tears with His; we gathered the First Blood shed by Jesus for Love of creatures, and we gave Him the Name of Jesus—Powerful Name, which was to make Heaven and earth tremble, and even hell; a Name which was to be Balm, Defense, Help for every heart.

Now, My daughter, this cut was the image of the cruel cut that man had done to his soul by doing his own will; and My Dear Son allowed Himself to be given this cut in order to heal the harsh cut of the human wills, and, with His Blood, to Heal the wounds of the many sins which the poison of the human will has produced in the creatures. So, each act of human will is a cut that is given, and a wound that opens; and the Celestial Baby, with His Painful Cut, prepared the Remedy for all the human wounds.

Now, My daughter, another Surprise: a new star shines under the vault of the heavens, and with its light, it goes in search of adorers, to lead them to recognize and adore Baby Jesus. Three individuals, each distant from the other, are struck by it, and invested by Supreme Light, they follow the star, which leads them to the grotto of Bethlehem, to the feet of Baby Jesus. What was not the astonishment of these Magi Kings, in recognizing in that Divine Infant the King of Heaven and earth—He who had come to Love and Save all? In fact, in the act in which the Magi were adoring Him, enraptured by that Celestial Beauty, the Newborn Baby made His Divinity Shine forth from His Little Humanity, and the grotto changed into Paradise; so much so, that they were no longer able to detach themselves from the feet of the Divine Infant—not until He again withdrew the Light of the Divinity within His Humanity. And I, exercising the Office of Mother, spoke at length of the Descent of the Word, and fortified them in Faith, Hope and Charity, symbolized by their gifts offered to Jesus; and, full of Joy, they withdrew into their regions, to be the first propagators.

My dear daughter, do not move from My side; follow Me everywhere. Forty days from the Birth of Little King Jesus are about to sound when the Divine Fiat calls us to the Temple in order to fulfill the law of the Presentation of My Son. So we went to the Temple. It was the first time that we went out together with My Sweet Baby. A vein of Sorrow opened in My Heart: I was going to offer Him as Victim for the Salvation of all. We entered the Temple, and first we Adored the Divine Majesty; then we called the priest, and having placed Him in his arms, I made the Offering of the Celestial Baby to the Eternal Father—Offering Him in Sacrifice for the Salvation of all. The priest was Simeon, and as I placed Him in his arms, he recognized that He was the Divine Word and exulted with immense joy; and after the offering, assuming the attitude of prophet, he prophesied all My Sorrows. O! How the Supreme Fiat sounded over My Maternal Heart—thoroughly, with vibrating sound, the Mournful Tragedy of all the Pains of My Baby Son. But what pierced Me the most were the words that the holy prophet spoke to Me: “This Dear Baby will be the Salvation and the ruin of many, and will be the Target of contradictions.”

If the Divine Will had not sustained Me, I would have died instantly of pure Pain. But It gave Me Life, and used it to form in Me the Kingdom of Sorrows, within the Kingdom of Its very Will. So, in addition to the Right of Mother that I had over all, I acquired the Right of Mother and Queen of all Sorrows. Ah! Yes, with My Sorrows I acquired the Little Coin to pay the debts of My children, and also of the ungrateful children.

Now, My daughter, you must know that in the Light of the Divine Will I already knew all the Sorrows I was to suffer—and even more than that which the holy prophet told Me. But in that Act, so Solemn, of Offering My Son, in hearing it being repeated to Me, I felt so pierced that My Heart bled, and deep gashes opened in My Soul.

Now, listen to your Mama: in your pains, in the sorrowful encounters which are not lacking for you, never lose heart; but with Heroic Love let the Divine Will take Its Royal Place in your pains, that It may convert them for you into Little Coins of Infinite Value, with which you will be able to pay the debts of your brothers, to ransom them from the slavery of the human will, so as to make them enter again, as free children, into the Kingdom of the Divine Fiat.

Holy Mama, in Your Pierced Heart do I place all my pains; and You know how they pierce my heart. O please! Be my Mama, and pour into my heart the Balm of Your Sorrows, that I may share in Your same Destiny of using my pains as little coins in order to conquer the Kingdom of the Divine Will.

Today, to honor Me, you will come into My arms, that I may pour in you the First Blood that the Celestial Baby shed in order to heal the wounds that your human will did to you; and you will recite three acts of love in order to mitigate the Spasm of the Wound of Baby Jesus.

My Mama, pour Your Sorrow into my soul, and convert all my pains into Will of God.

Permanent link to this article: https://www.bookofheaven.net/2021/12/25/feast-of-the-holy-family/