Our Lady of America 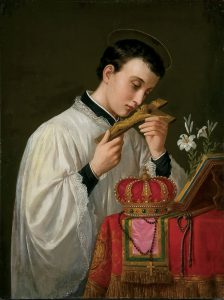 St. Aloysius was born in Castiglione, Italy. The first words St. Aloysius spoke were the Holy Names of Jesus and Mary. He was destined for the military by his father (who was in service to Philip II), but by the age of 9 Aloysius had decided on a religious life, and made a vow of perpetual virginity. To safeguard himself from possible temptation, he would keep his eyes persistently downcast in the presence of women. St. Charles Borromeo gave him his first Holy Communion. A kidney disease prevented St. Aloysius from a full social life for a while, so he spent his time in prayer and reading the lives of the saints. Although he was appointed a page in Spain, St. Aloysius kept up his many devotions and austerities, and was quite resolved to become a Jesuit. His family eventually moved back to Italy, where he taught catechism to the poor. When he was 18, he joined the Jesuits, after finally breaking down his father, who had refused his entrance into the order. He served in a hospital during the plague of 1587 in Milan, and died from it at the age of 23, after receiving the last rites from St. Robert Bellarmine. The last word he spoke was the Holy Name of Jesus. St. Robert wrote the Life of St. Aloysius.

The love with which Saint Aloysius operated.

It continues always in the same way. This morning, it seems that Jesus wanted to cheer me a little bit, after I had gone in search for Him for some time. I saw a child from afar, like lightning that falls down from heaven; I ran up to him, and as I arrived, I took him in my arms. A doubt came to me that it might not be Jesus, so I said to him: ‘My dear little treasure, tell me, who are you?’ And He: “I am your dear and beloved Jesus.” And I to Him: ‘My beautiful little baby, I pray You to take my heart and bring it with You to Paradise, for after the heart, the soul too will come.’ Jesus seemed to take my heart, and He united it so much with His own that they became one.

Afterwards, Heaven opened; it seemed that a very great feast was being prepared. At that very moment a young man of lovely appearance came down from Heaven, all dazzling with fire and flames. Jesus told me: “Tomorrow is the feast of my dear Aloysius – I must go attend.” And I: ‘And so You leave Me alone – what shall I do?’ And He: “You too will come. Look at how beautiful Aloysius is; but the greatest thing in him, which distinguished him on earth, was the love with which he operated. Everything was love in him – love occupied him interiorly, love surrounded him externally; so, one can say that even his breath was love. This is why it is said of him that he never suffered distraction – because love inundated him everywhere, and with this love he will be inundated eternally, as you see.”

And in fact it seemed that the love of Saint Aloysius was so very great, as to be able to burn the whole world to ashes. Then, Jesus added: “I stroll over the highest mountains, and there I form my delight.” Since I did not understand the meaning of it, He continued: “The highest mountains are the Saints who have loved Me the most, and in them I form my delight, both when they are on earth, and when they pass into Heaven. So, everything is in love.”

After this, I prayed Jesus to bless me and those whom I was seeing at that moment; and He, giving His blessing, disappeared.

Prayer for Saint Aloysius or for any other saint that you want to offer it for!

Permanent link to this article: https://www.bookofheaven.net/2016/06/21/feast-of-st-aloysius-gonzaga/